(The Clifton Chornicles: Book #1) Only Time Will Tell - Book Review

I had mentioned in my last book review of – “Best Kept Secrets” by Jeffrey Archer that I shall start with the first book from “The Clifton Chronicles”. Well, I managed to keep the promise I made to myself. I had finished reading “Only Time will Tell” a few days back. 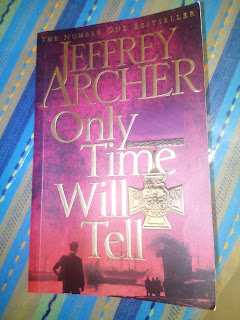 It is the story of Harry Clifton who makes his way from the dockyards of Bristol, where he watches the ships as a child to the Oxford University. At a very young age his only idea of a bright future is getting to work at the dock in Briston when he grows. But destiny has a different plan for him.

And so the story interweaves through a lot of characters. Most important story of all being the revelation of the question as to how did Harry’s father die? Harry has been portrayed as smart and inquisitive in the novel with a natural urge and tendency to learn. He can put two and two together to figure out that of course his father – Arthur Clifton could not have died in the war; a story that was fed to him ever since he was a child.

Old Jack Tar was my favourite character in the book. A self-imposed recluse who is a mentor to Harry. Though forbidden by his uncle Stan, Harry visits Old Jack Tar and finds his first friend in him. He gives Harry a perspective to see the world outside the docks.

Then there are the characters of Giles Barrington and Deakins; Harry’s friends right from the first day at St. Bede’s. Friends he cheers and show promises to stay for life. Eventually Harry and Gile’s sister Emma fall in love and it would have all worked out beautifully, but for the intrusion of Hugo Barrington, Gile’s father.

Right from the first day Hugo comes to know of Harry, he has a dislike for him. He is hell bent on destroying Harry’s career and sending him back to the docks. From the entry of Gile Barrington, the story has a lot to do with Harry’s parentage and perhaps the reason for Arthur Clifton’s death. These are the questions that perhaps answer Hugo’s hatred for Harry.

One interesting thing that I found in this book was that while each section of the book is from the perspective of a certain character, the first chapter of each section is from the first person view itself. The story connects very well because of the multi character perspective presentation done remarkably. This was specifically very well written for Harry Clifton and Masie Clifton.
However, the most interesting part of the book was Jeffrey Archer’s courage to present one part of the book from the perspective of the antagonist – Hugo Barrington. This I would say is a bold way of saying a story, but while showing his cunning at great deal, it would have made some sense to show him as an intelligent character too. Well, of course it’s up to the author, it’s his story. However, showing a negative character as a total failure in life is quite old school.

The ending of the book where the story for the next sequence was being built was noteworthy, but not exactly good enough to make you rush for the next book in the series. I actually tired out at instances.

Over all, I will rate the book – “Only Time Will Tell” in my review as a 3 out of 5. The book did keep me turning the pages at most instances to know what’s happening next; but not always. Some of the parts were quite expected. One thing that I have to give Jeffrey Archer is this – you cannot start reading the Harry Potter book series by picking up any book after the first and understand the story lineup, but “The Clifton Chronicles” has not been handled that way. You can pick up any book. Whether it’s for the good or bad, that depends on the reader’s choice.
Posted by SNA